skip to main | skip to sidebar

For those of you that started flying what are now known as Light Sport Aircraft, i.e.-Microlights, Ultralights, Hang Gliders,and Paragliders, after the year 1996, you may have never heard of "Second Chantz Aerial Survival Equipment, Inc." one of the world leaders in developing ballistic deployed parachute systems that can save whole aircraft and their occupants during extreme emergencies. That company was closed down in 1996 after producing over 4000 recovery systems since 1983, and documenting over 70 saves. This is the "short" story of that company, it's people, history, accomplishments, and its Reincarnation here in 2010.
Thanks for dropping by! 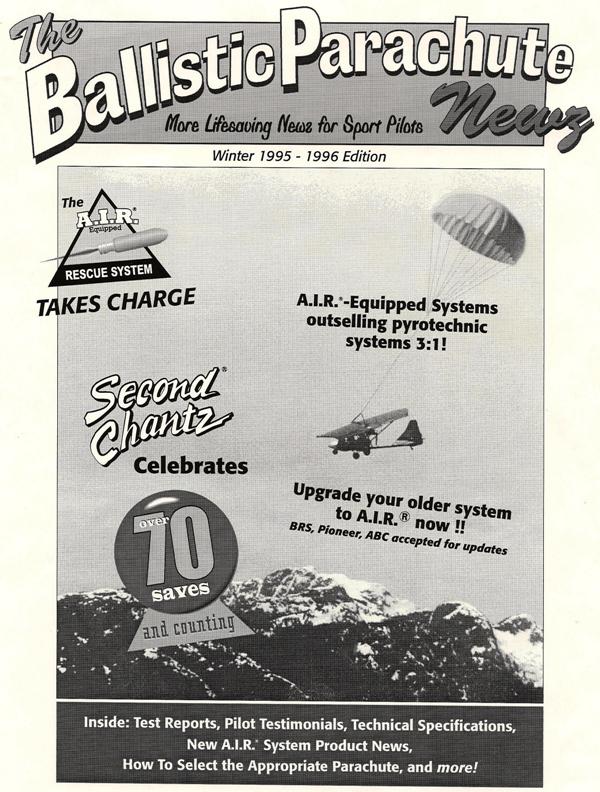 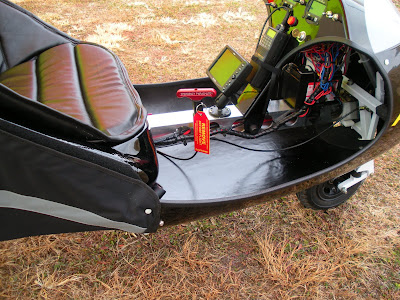 I wanted to write and thank you for the prompt and professional way you provided a ballistic chute for the Astra 103.

I was at my wits end with both G*****y and B*S over their unbelievably poor customer service and bare faced lies. It is inconceivable to me that either of these companies will continue in business in any meaningful long term way with their current attitude to their customers.

You did what you said you would and the chute was exactly as promised. It fitted like a glove and my customer was very happy. I could not ask for more.

Once again many thanks

Allistair
Posted by J Dunham at 8:16 AM No comments: 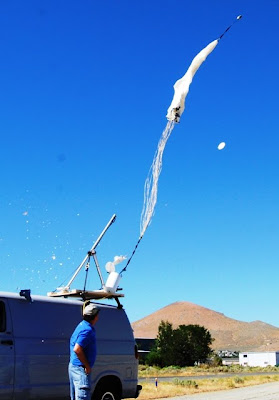 It's Amazing what 5000 psi of dry, cool, non flamable Nitrogen Gas, vented through a rocket nozzle at supersonic speeds from a carbon fiber wrapped pressure cylinder, can do!
Posted by J Dunham at 8:05 AM No comments: 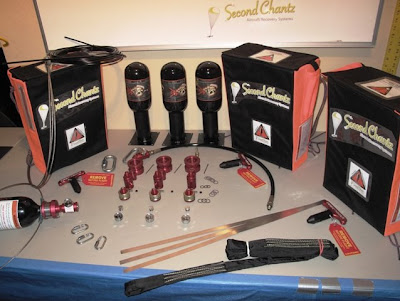 Our test program is complete. We are satisfied that our new generation Nitrogen gas parachute extraction device is going to eliminate the pyrotechnic devices traditionally used by Second Chantz, and others. Check out our newly updated Web site at Secondchantz.com for all the details!
Posted by J Dunham at 7:56 AM 2 comments: 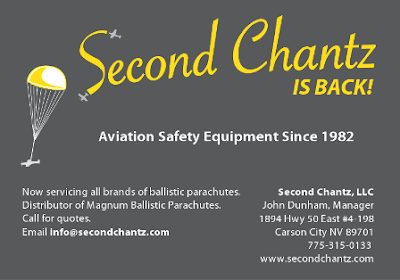 This just in... our super talented director of marketing, Eric Roberts, has just finished up our new 21st century LOGO. Eric was a member of our team going back to 1992, and we are real happy to have him back on board!
Posted by J Dunham at 12:08 PM No comments: 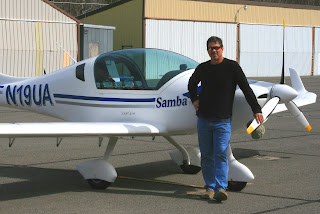 Second Chantz Recovery Systems Announces Comeback
John Dunham, former President of Second Chantz Aerial Survival Equipment Inc., announces the re-incarnation of the Nevada Corporation which closed operations back in 1995. The new company will manufacture and distribute recovery systems for most Light Sport Aircraft, plus perform re-packing, updating and scheduled service for ballistic recovery systems from any manufacturer. Additionally, Second Chantz will bring back its patented A.I.R. Equipped Recovery devices for Hang Gliding and Paragliding Pilots.
Carson City, Nevada. March 28, 2010. Many pilots may remember the Second Chantz Company as one of the world’s major ballistic parachute manufacturers between 1981 and 1996. During that time frame, Second Chantz designed and manufactured over 4,000 ballistic recovery systems for Experimental Aircraft, Ultralights, Hang Glider pilots, Paragliding, and even early ROV’s for the military, while logging over 70 saves around the world. The company was closed down in mid 1995, and John Dunham went on to other ventures in and out of the Aviation field.
After recent business ventures which included 5 years being one of the largest distributors of the Flight Design CT in the Western USA, and a year as national marketing manager for the Evektor SportStar, John decided to go back to his original aviation roots. Many from the former Second Chantz team have jumped at the chance to get back into the business with John, including his former shop manager Avery DeMarce, his machinists Steve and Pat Habegger, and most of his original suppliers of sub-assemblies and components.
The new Second Chantz team is looking forward to giving its 7000 former customers a ‘second chance” on their out-of-date recovery systems and also giving BRS some friendly head-to-head competition on service work and new system sales.
When asked “Why start a company now, after 15 years of being out of the business, and with the country in a deep recession?” John put it simply; “It’s what I know and love. There is no better feeling than receiving a phone call from an excited customer who has just taken a ride on one of your systems during an emergency. Hearing or reading the words “Thanks for saving my Life” becomes addictive. Plus, when one company has a virtual monopoly on a market (BRS) the customer loses. There is no incentive for that company to hold down prices, give the best possible service, and go the extra mile for their customers. Competition is good. When I originally took over Second Chantz from Steve Lantz in 1983 there were 5 companies in the market. We survived for 15 years, competing against companies like Pioneer Aerospace, GQ Security, Advanced Ballistic Chutes and BRS. I got out of the market in 1995 because I was ready for a change, and wanted to take a sabbatical. Since then, I’ve been watching the ballistic parachute business from the sidelines, and have even been a dealer for BRS products. I haven’t seen much innovation to the basic product we developed 25 years ago. BRS has done a great job of developing systems for the widest possible variety of aircraft and I admire their team. They have the saves to prove they’re doing good work. BRS is mostly responsible for General Aviations’ acceptance of the concept through their systems for Cessna’s and the Cirrus.
With a new state of the art repacking facility going together in Carson City, Nevada, we are ready to start taking new system orders and perform repack services now. We will have replacement rocket motors for those systems over 12 tears old, and can update most older systems manufactured since 1982 at a reasonable cost. With our return, we hope to inject new technologies into the market, and give the customer a choice when it comes to Aviation safety products. We plan on concentrating on the LSA market up to 1320 pounds gross in the beginning and have no General Aviation System plans as yet.
Second Chantz is a full service ballistic parachute company with decades of experience, an energetic team, competitive prices, and an attitude that will impress the new generation of Light Sport Pilots.
Contact; John Dunham, Manager
Director of Sales and Marketing
Second Chantz, LLC
1894 Hwy 50 East #4-198
Carson City, Nevada 89701
775 315 0133
SecondChantz2@gmail.com
www.secondchantz.com
Posted by J Dunham at 10:23 PM No comments: 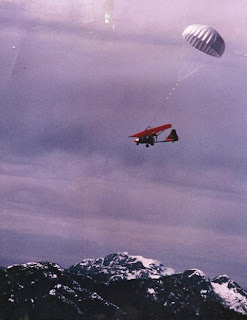 Over the years, Second Chantz worked with several aircraft manufacturers to establish installation guidelines to insure proper parachute function. Many times a manufacturer would supply an aircraft for actual in-flight deployment tests. In this photo, taken 4000 feet over the Frazier River in British Columbia, test pilots' John Dunham of Second Chantz and Gary Douris of chute manufacturer "Free Flight Enterprises" have deployed a Sidewinder Model 750, and are measuring descent rates at full gross weight using a Beaver Microlight. Because of the heavy forest below, the parachute was cut away in flight, the Rotax engine was restarted, and a normal landing was performed. Dozens of in-flight tests were performed over the years.
Posted by J Dunham at 11:20 AM 1 comment: 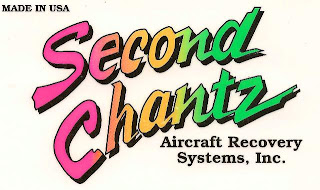 Our famous "Second Chantz" Logo, recognized around the world. During the 80's and 90's Second Chantz had distributors in Europe, United Kingdom, South America, Canada, Taiwan, Japan, and elsewhere.
Posted by J Dunham at 10:27 AM 1 comment:

Back to our Beginnings - A Tribute to Our Founder

Steve Lantz, of Incline Village, Nevada, was the original founder of Second Chantz Aerial Survival Equipment, Inc. in 1982. Thus... the name Chantz came into existence. During his career, Steve has flown just about every type of aircraft, from the early days as a Naval Aviator in Vietnam, Hang Gliding around the world, then clear up to thousands of hours in DC 8's...Steve originally developed the wing mounted parachute pod that performed flawlessly when early ultralight aircraft pilots pulled that ripcord. It was ingeniously simple... Bomb-bay doors opened up the pod and released a drogue chute dragging the parachute in a deployment bag out for a fast 3 second opening time. When Steve decided to go on to other ventures, John stepped up and took over the company in early 1984. Steve has had us equip many of his exotic flying machines over the years. Steve and his wife Patricia pose by their "Tahoe Special" 400HP Corvette powered seaplane.
Posted by J Dunham at 2:09 PM No comments:

Few Things Haven't Been Done Before!

Here's some Old Newz...Take a look at this video... Whole Aircraft Parachutes are almost as old as the first aircraft! Although this guy didn't use a rocket to deploy the chute, it still worked flawlessly.
http://www.youtube.com/watch?v=9aj9WPH10DM
Posted by J Dunham at 1:58 PM 2 comments:

J Dunham
Carson City, Nevada, United States
John Dunham took his first flight in a J2 Cub with his dad in 1958. He has been involved in many aspects of the sport aviation community since 1973. John is a former World Class Hangglider pilot starting in that sports' infancy in 1973. In 1978 He became an Ultralight Aircraft Test Pilot and Flight Instructor, a Sailplane Pilot, and then spent 15 prolific years inventing and manufacturing ballistic parachute systems for light aircraft through his Reno based company "Second Chantz Aerial Survival Equipment" John's ballistic parachute systems were documented to have saved dozens of lives over the years, including his own. In 1996 John sold his parachute company and patent rights to the BRS company. John has also traveled the world flying various portable aircraft in exotic locations shooting aerials for many IMAX and Natural History films you may have seen in Theaters or on PBS. Between 2003 and 2009, John has successfully marketed, imported and distributed several aircraft types from Europe, including the best selling German designed LSA, the Flight Design CT, and the Lambada Motorglider, through his Nevada based company, Flight Design West, LLC.